For the umpteenth time in the horror genre, the evil wishing Djinn returns to grant nothing but havoc in a tedious scare flick that not even the wonderful Lin Shaye can save…..

For all its dumb stupidity and pure 90’s hokum, that and its sequel are one of my favourite guilty pleasures, mostly because of the central performance of Andrew Divoff who gave such a menacing presence as the evil Djinn that he was solely missed in the further sequels.

If you have a memorable performance in a movie, more so in a horror, then it can at times help the awfulness on show. I mean Freddy’s Dead is one of the worst horror films of all time, but I will always watch and enjoy, simply to see Robert Englund play with his Power glove, in what still is one of the most craziest and yet ridiculous scenes in horror history.

The Final Wish tries its best to be a Wishmaster for the new generation. Even the casting of the fantastic Lin Shaye gives us hope that there is something to grab onto and a chance that despite it being a Digital Launch, that there will be some good to its obvious cheap limitations. Sadly not even the talents of Shaye can save this from being a complete and total dud!

A cliché opening paves way for our introduction to Aaron (Michael Welch), whose Dad has just died and he returns to his hometown where he is greeted to a reunion with his troubled mother (Shaye), some old friends, including his old crush Lisa (Melissa Bolona), a standard introduction in which we all know that they’ll eventually get sucked into the horror that awaits.

Unlike Wishmaster in which the characters knew full well that they were asking for their wishes to be granted, Aaron is unaware of the power of the strange looking Urn that his Dad- an antiques dealer- had in his possession, until of course his life starts to strangely improve.

Its only here that the film shows a deft skill in its script and raises the mundane vibe. When Aaron casually says that “he wishes he was better looking” and a car accident later, he is….then you have to admit that there is some cleverness hidden within the script. Unlike most of these films, Aaron doesn’t realise that every wish he makes is coming true, even though some of them don’t actually add up and cause more plot flaws that you’ll question when you should be enjoying.

But then all that could be ignored if the scares were actually good! A lack of real build up and tension means we go from one scene to the other without feeling any urgency and when Tony Todd pops up for his obligatory cameo, then you know the film is desperate to grab what it can from the horror fans watching.

By the time the Djinn finally reveals himself, and the danger Aaron has put himself in, many will be twiddling their thumbs, waiting for the final credits to roll and while the DVD cover boldly states “From the creator of Final Destination“, you’ll be shocked at how uncreative the death scenes are and the lack of blood will no doubt put off the gore-hounds who want some violence to their tale.

As expected, the climatic battle is nothing we haven’t seen before, while the final shot will bring tears of laughter for being so ridiculously bad that it will bring more guffaws than the required terror.

Somehow The Final Wish makes the much maligned Wish Upon seem like a work of art and for most fans, if they could make one wish, it would be to get back the hour and a half they wasted watching this total turkey! 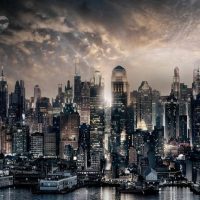