It didn’t set the box-office alight, but since its release in 2011. Gavin O’Conner’s fight flick WARRIOR that starred Tom Hardy and Joel Edgerton as two estranged brothers, who ended up squaring off in a metal cage has become a beloved tale, finding a fanbase and winning huge critical acclaim from all who have seen it.

Now its been confirmed that O’Conner is adapting the premise for Lionsgate Television, who in return has made a deal with Paramount+ to develop it, while O’Connor is in talks with retired two-time UFC champion Daniel Cormier and Gina Rodriguez to play two of the four main combatants that will shape the MMA drama.

Adair Cole, will serve as an executive producer and showrunner while O’Connor will direct all ten episodes of the series.

Here is why O’Conner is turning his film into a TV Show:

“Over the years, I’d been approached by Lionsgate to do Warrior as a TV series, and I honestly was never interested. Over the pandemic, I was in a different frame of mind, and they said, ‘Someone came in with an interesting take, Adair Cole,’ and I listened to it and liked it. There was some really interesting stuff in there. I started sketching out characters, expounding what he had and gene splicing things, and I called him after the holidays and said, ‘I’m in. I think I want to do this.’ We started figuring out the characters. The thing I said to Adair and Lionsgate, which wasn’t in the pitch, is that this is about the life fight. I didn’t want to make something on fighting in a cage. That wasn’t the movie I made, it’s about a life fight. We will have two women and two men, we’re going to follow them through 10 episodes and hook the audience into their journeys and they’re eventually going to face each other. Like in my movie, I tried to challenge the audience: Where are your loyalties? Where do your sympathies lie? Who are you rooting for? If I hook the audience into the stakes of each character’s life outside of the cage, what I call the life fight, then people are going to be invested in the stakes. That’s the heart and soul of the show.” 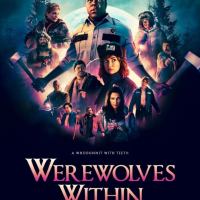